RZ/G2L boot modes are summarized in the table below.

When the eMMC is delivered from the manufactures is normally divided into several areas as shown below. 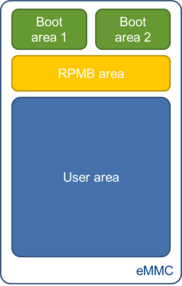 In most of the Linux applications covered by the RZ/G2L, when it comes to non-volatile memory there are two main use cases: 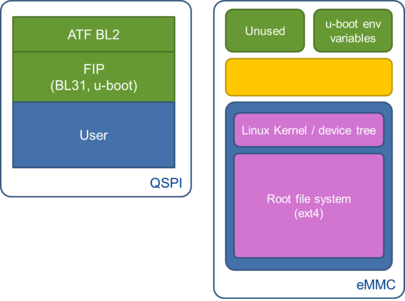 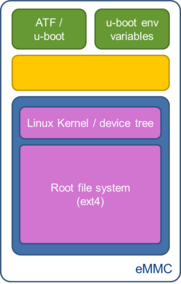 Very often there is only one ext partition in the user space and Linux kernel and device tree are stored in it (e.g. /boot folder). 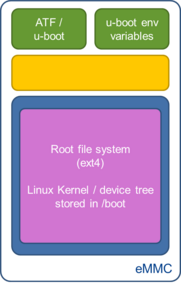 There might be other special cases but we can confidently state that these cover the great majority. We can also reasonably say that being the RZ/G2L a low-end device, there is the tendency to remove the QSPI to save money on the BOM.

At the end of the production line of course non-volatile memories are virgin (with a notable exception explained later) and need to be programmed. Usually firmware and bootloaders are relatively small (less than 1MB in total), kernel is instead in the tens of megabyte range and rootfs can go up to several hundreds of megabytes. To transfer this amount of data a fast interface is indeed required.

RZ/G2L cannot boot from USB, so at the end-of-line there are a few real viable options:

In any of the cases above the goal is to have U-Boot up and running, then there are plenty of options to program the rootfs: ethernet, SD card, USB as host, USB with Mass Storage gadget, fastboot or even boot Linux kernel + initramfs.

With option 1, you can download Flash Writer and program the bootloaders, Arm Trusted Firmware (ATF) and U-Boot, into QSPI / eMMC boot partition, then reset and run U-Boot.

With option 2, you can download ATF and U-Boot via JTAG and then run the boot loaders without having to initially program them. Once U-Boot runs, you can program both bootloaders and rootfs.

With option 3, QSPI has already bootloaders pre-programmed, so U-Boot is already available.

With option 4, a QSPI flash card is somehow attached to the board that needs to be programmed. The QSPI flash contains ATF and U-Boot and potentially also the root file system to be programmed, depending on the size of both. More details are available here.

All the options above may not require any human intervention and can be to a certain extent automatized.

In the rest of this page follow some examples on how to implement a fully atomized flash programming. More in particular we will focus on option 1, where:

It is assumed that all binaries to be programmed are already available, for example as result of the porting of the BSP. This is the list of items that are needed:

However, there are other things to be done beforehand: step 0.

These parameters ensure that:

It is important to note that u-boot has to be built with USB support, obviously. It may not be enabled by default, refer to this TBD page for more details.

u-boot binary (u-boot.bin) has to be combined with bl3x to generate fip.bin, assuming bl31.bin only:

fiptool is a tool distributed with ATF.

Instead of building another ad-hoc version of u-boot, we can create a environment variable binary file that can be programmed to a specific location using Flash Writer. These environment parameters are the same as the previous section. To do that we can use a utility called mkenvimage. First of all we have to create a text file (u-boot-env.txt) with the environment variables as we would read them from u-boot, e.g.:

Then we can convert this into a binary using mkenvimage:

What is important to notice is the size (-s). This parameter must match what is configured in u-boot, take note also of the offset and partition where the environment variables are stored. If the command gets executed correctly, we will end up with a binary file (u-boot-env.bin) whose size is exactly what specified, in the example above exactly 128KB.u-boot-fw-utils

Once the kernel is running, instead of dealing with binaries that are somewhat not very convenient, we can use the utilities that are part of the former u-boot-fw-utils package, nowadays called libubootenv: fw_printenv and fw_setenv.

In order to get it build and be part of the generated image, the following packages shall be added in the local.conf (Yocto):

To use these two utilities a text configuration file (/etc/fw_env.config), including a single text line to tell the tools where to find the data:

The meaning is quite obvious. In the first column we find the device where the data is stored (in this example it is eMMC, boot partition 2). The second column is the offset, in a similar way it is defined in the u-boot parameter, so a negative number is treated as a backward offset from the end of of the eMMC device/partition. The last column is the size.

One last step is to create a script file that is going to be used by fw_setenv to (re)set the environment variables to what they will have to look like eventually. The syntax is very simple:

This is the script that is going to be executed right after the kernel has finished booting.

Any root file system, including the final one that was created for the final application can be turned into a initramfs. However you have to take in account that it is convenient to have a small one. First it is loaded quicker from the thumb drive, then it has to be small enough to comfortably fit into the DRAM. In this example the initial rootfs is created using Yocto: bitbake core-image-minimal. You may want to add packages like mtd-utils and mmc-utils that are useful to program QSPI and eMMC.

Once the minimal rootfs has been created, we have to modify it to add the custom initrd script (see previous section). In general, assuming you have your rootfs in the usual tar.gz/bz2 format, first of all we have to untar/unzip it into a temp folder:

You want to use sudo because then all the files have root owner.

Assuming in the same folder the initrd script, as well as bl2, fip (definitive version) and other files are available:

Let's get the initrd script executable:

We have to create a init symbolic link into the root folder:

Now we are ready to pack the modified files to cpio ‘newc’ format:

If the last command fails, then you need to install u-boot tools. For example in Ubuntu:

We can now prepare a thumb drive with the following content:

The main tool that can assist in performing external non-volatile memory (QSPI and eMMC) is Flash Writer. Depending on the host PC used, you can either use a bash script or a TeraTerm macro. In both cases you would need two / three files:

The file names may vary a bit. These are either the output of Yocto or generated by combining ATF and U-Boot binaries. Actually the first one is generated by ATF directly whereas the second is the generated by the Firmware Image Package (FIP) utility by combining BL3x binaries (BL31 secure monitor, optionally BL32 OP-TEE and BL33 u-boot).

u-boot-env.bin can be created as per instructions here.

A Linux bash script is available here. Please refer to the README for help on the usage.

Usually dealing with this type of devices a Linux host PC is normally available. However sometimes it might be convenient to have a quick way to program the bootloaders using Windows. Especially during production, a Windows PC may be more convenient than a Linux PC.

Instead of using an ad-hoc tool developed only for the RZ/G2L the idea is to use a generic terminal utility. Tera Term is an open source tool that has some nice scripting capabilities embedded: a Tera Term script is called MACRO. The developed macro "replaces" the user and provides inputs to Flash Writer, whose binary is also downloaded automatically. There are just a couple of parameters that you would need to change (open the macro with a standard txt editor), stuff like COM port or the name of the Flash Writer binary to be used and whether the target is QSPI or eMMC. The "UNATTENDED" parameter suppresses all the user interaction apart from errors.

stores the environment variables at a backwards offset from the end of the eMMC boot partition 2. eMMC may have different boot partition sizes, the actual value can be obtained by reading the extended CSD register 226, for example, using Flash Writer command EM_DECSD we will get something like:

It is assumed that MD_BOOTx pins are already configured for the final boot mode. However, if the target flash is virgin / erased, the boot mode selected fails over to SCIF download, allowing the Flash Writer bin to be downloaded. 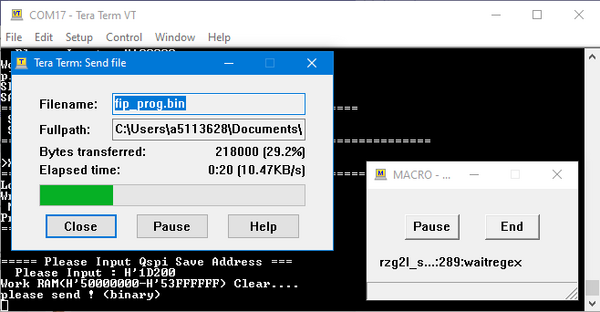 When the procedure is complete, the system gets reset and the system boots using the newly programmed files.

At this step there's not anything to do, just to check that what we've done at step 0 works consistently. If everything is ok the system goes thru the standard boot stages and u-boot load kernel and initrd from the USB thumb drive. 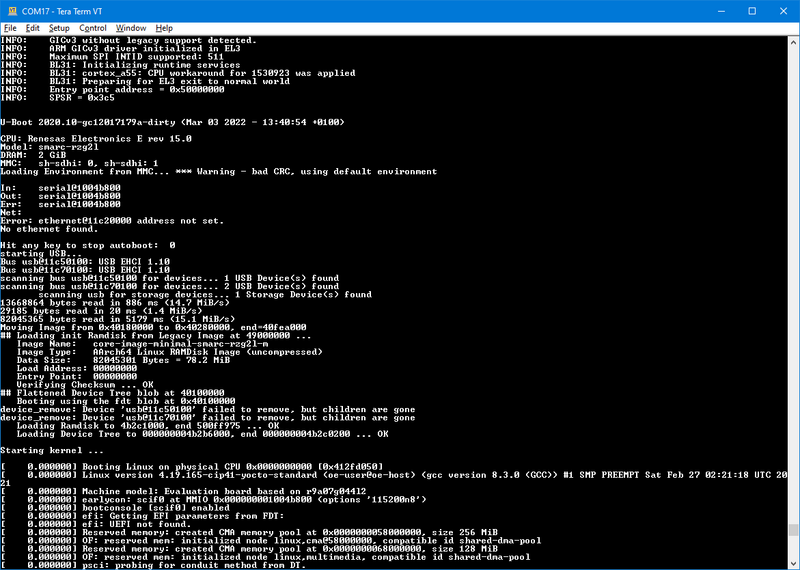 At this stage the custom initrd script is executed, programming the rootfs onto the eMMC user area. Note that at the end of the copy the ext4 partition is resized to the max allowed by the eMMC. Again, we just need to check that everything is inline with expectations. 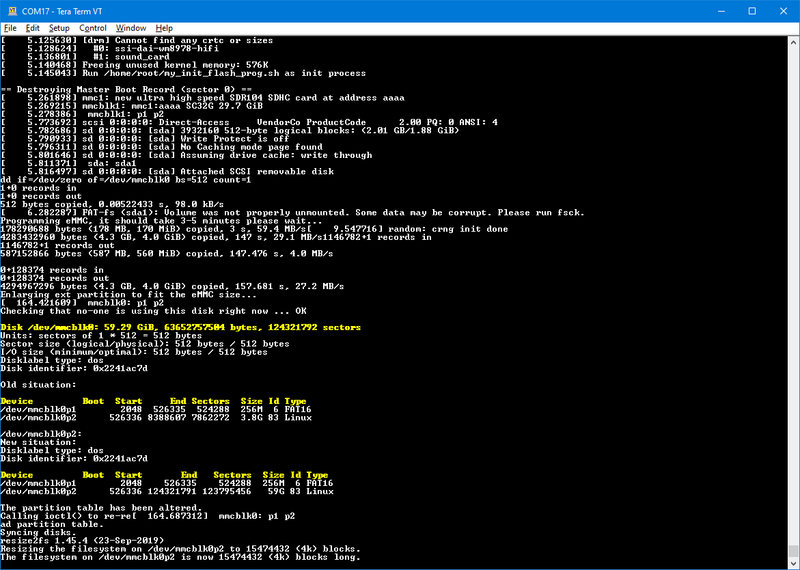